4 Things You Should Know About Pipe Coiling 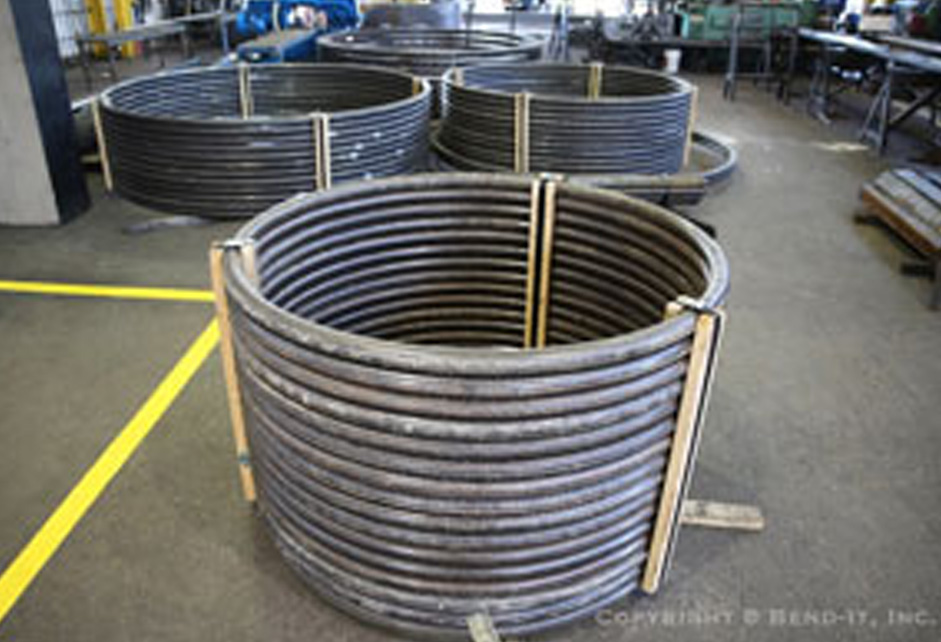 4 Things You Should Know About Pipe Coiling

A significant portion of the pipe bending operations performed today are pipe coiling services, where a length of pipe or tube is bent into helical spiral, similar to a spring. Pipe coiling is used to create custom pipes and other structures for many industries, and it can be a complex process.

Here are some of the basics about pipe coiling and what it is used for:

What Is Pipe Coiling?

Pipe coiling services use specialized machines to bend a length of tube or pipe into a spiral, similar to the coil spring on an automobile or a child’s spring-like toy that can descend stairs. The finished product can consist of a single coil or two or more nested coils, and it can be made from a variety of pipe lengths, diameters and wall thicknesses. The diameter of the bends can be customized, as well as the pitch of the spiral.

How Is It Done?

There are several types of machines that can be used to coil pipes. One type uses a spinning drum that draws a relatively short length of pipe around it. Pipe is guided perpendicular to the main bend, or laterally, by a separate roller to create the spiral.

A second type, the three-roll bender, is a manually-operated machine that uses two rollers to guide the pipe, and a third to apply force, creating the bend. Using lateral force, a spiral can also be created.

The third type is called a helical coil spiral and pitch rolling bender, and it is similar to a manual three-roll bender. It pushes the pipe through a set of three rollers to bend it, while separate rollers create the spiral by bending it latterly. Other machines use a similar method with more rollers to better control the shape.

A fourth type of machine, called a two-disc coil bender, draws the pipe around a spindle, while several rollers guide it to create the spiral. It operates similar to the drum machine, but can work with longer lengths of pipe or tube.

Most of these machines are hydraulically operated and computer-controlled to make consistent bends in the pipe without the chance of human error, though some, like the three-roll bender, need to be constantly controlled by a person. The machines are very expensive and complex, requiring a large investment in both money and time to acquire the machine and to properly train the personnel to use it safely and effectively. That is why most pipe bending is done by dedicated metal fabrication or pipe bending services.

What Is Coiled Pipe Used For?

There are several uses for coiled piping and pipe coiling services, across many different industries.

Coiled piping is often used in the refrigeration and air conditioning industry as a heat exchanger. Compared to serpentine pipe bends or regular straight pipe, helical coiled pipe provides a much greater amount of surface area to better facilitate the heat exchange process between the refrigerant inside the pipe and the air or the ground surrounding the pipe. This allows the refrigerant to release or gain heat quickly, making the heat exchange quicker and more efficient. Coiled pipe can be used in the evaporator or condenser coils of air conditioning systems, and it is especially useful as the ground loop in a geothermal system, where it is buried in the ground or placed under water. The coiled pipe, especially when nested, allows the ground loop to occupy a much smaller space.

Coiled pipe is also used in the distillation of alcoholic beverages, such as whiskey, vodka or brandy. Essentially, during the distillation process, the impure fermented liquid is heated until the alcohol starts to vaporize, or boil. The alcohol vapor is separated from the water vapor and routed through a coiled pipe that is in a container of cool water, where the vapor cools and condenses into purified alcohol. The coiled pipe in this application is called the worm, and it is often made from copper.

Another use for coiled pipe is in the oil industry, where large spools of it are placed into a specialized machine that unwinds it then pushes it down or injects it into the oil well. Unlike traditional pipe, there are no joints to connect, no leaks, and because the pipe is pushed, it can often get around obstacles that would stop gravity-fed pipes. The installed pipe can then be used to pump chemicals into the well to facilitate production or for well interventions, or the pipe can be used for production purposes to bring oil or natural gas to the surface.

These are just a few of the many uses for coiled piping. There are many other industries in which it is used as a heat exchanger or for transporting liquids or gases. As the oil industry continues to expand domestically, using more and more lateral drilling and hydraulic fracturing, the demand for coiled piping will continue to increase.

What Types of Pipe Can Be Coiled?

Almost any type of malleable pipe can be coiled, including steel, galvanized steel, stainless steel, copper and aluminum. The pipe can range from less than an inch in diameter to several inches, depending on the job, and almost any length of pipe can be coiled. Pipe with extremely thin wall thicknesses can be coiled, as well as thicker pipe up to schedule 40 and beyond. Coils are available in flat or pancake styles, single helices, dual helices, nested coils, continuous pipe spools, and many other configurations depending on the equipment available and the requirements of the specific job.

Coiled pipe is used in many different industries, and if you have a project that requires a length of coiled pipe, you will likely have to rely on a specialized pipe coiling and bending service. Pipe coiling and bending services have all the expensive specialized equipment and the years of training that are necessary to ensure that your project receives the quality coiled pipe that it needs for completion. Though you may be able to complete a small project without using a pipe coiling service, you will receive a better quality result by trusting the professionals.